he Hanbury Family creators of the American Gardens, first came to South Wales to establish an ironworks in the 16th century and became influential industrialists in the locality of Pontypool. Over the following 200 years or so, as the family’s industrial interests expanded and their fortunes grew, they acquired extensive land holdings within the Welsh valleys and beyond. In the late 17th century, like many wealthy industrialists of the time, Capel Hanbury built a mansion, Pontypool House, close to his works but also located to enjoy the beauty of the natural landscape of the nearby Brecon Beacons. Around this, extensive formal gardens were created, with a deer park beyond.

he American Gardens are adjacent to Pontypool Park with "The Folly" and "The Grotto" nearby. They are the property of The Pontypool Park estates. The Gardens were originally known as The American Grounds in the 1850s but prior to that they were named The Coppice Fawr. The American Gardens do not merely represent the indulgence of a successful industrialist’s taste for beauty following the gardening fashions of the day. They also symbolize a piece of community history and an act of social conscience. The wonderful exotic trees were planted during a period of energetic Victorian plant collecting, when wealthy land-owners throughout Britain took pleasure in embellishing natural landscapes with recently introduced exotic plants to create a heightened drama. But work on the Gardens began in 1841, during a time of local depression. When confronted with the need to lay off workers from his ironworks, Capel Hanbury Leigh provided alternative employment through his garden project, extending the pleasure grounds associated with Pontypool House.

snaking carriage drive already led from the big house, through the heart of the Gardens site and on towards a hill-top folly to the north-east. Capel Hanbury Leigh’s new and glamorous planting created a piece of theatre along the way, heightening the natural drama of the secluded woodland landscape. Today’s dense undergrowth conceals the ambitiousness of the design. The centrepiece to the Gardens - a sinuous ornamental pond of which spans a distance of over 100m in length - is of a piece with the carriage drive: the drive runs along the top of a long dam which follows the hillside contours. At the very heart of the woodland, a woodman’s lodge built in a highly picturesque ‘Hansel and Gretel’ style, heightens the sense of being lost in a romantic, fairy-tale landscape.

he American Gardens of Penygarn may not have been large or exceptional or ahead of their time, but they typify a style of ornamental woodland gardening that was popular in the 1850s. Importantly, much of what was created then, although now dilapidated, still survives and has the scope to be restored with a good degree of accuracy. The Rhododendron varieties found growing in the Gardens are now rare and merit protection and conservation for their historic and horticultural value.

lthough initially created as a private pleasure ground and then used later as a beat for shoots, the Gardens were always known and frequently visited by local people. Louisa Hanbury, wife of John Capel Hanbury, used to give tea parties by the pond in the 1890s.  But through the first half of the 20th century the gardens quietly went to sleep and, after the Second World War, started to become neglected. However, local people have continued to know and visit them, by permission, up until the present day. Many local residents have fond memories of going to the gardens as children, often with school parties, or on more clandestine excursions of their own. The teachers of Penygarn Community Primary School continue to take groups of pupils into the Gardens regularly to watch and study the wildlife, marvel at the dramatic trees and enjoy the romantic ‘Hansel and Gretel’ atmosphere of the Rustic Lodge. 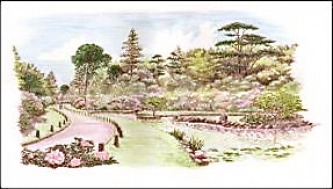